Review of DC to DC buck converter based on LM2596

Review of DC to DC buck converter based on LM2596

The ability to construct hi-current variable voltage PSUs that generate very little heat, are small, cheap and use only a handful of components are a constructors dream. 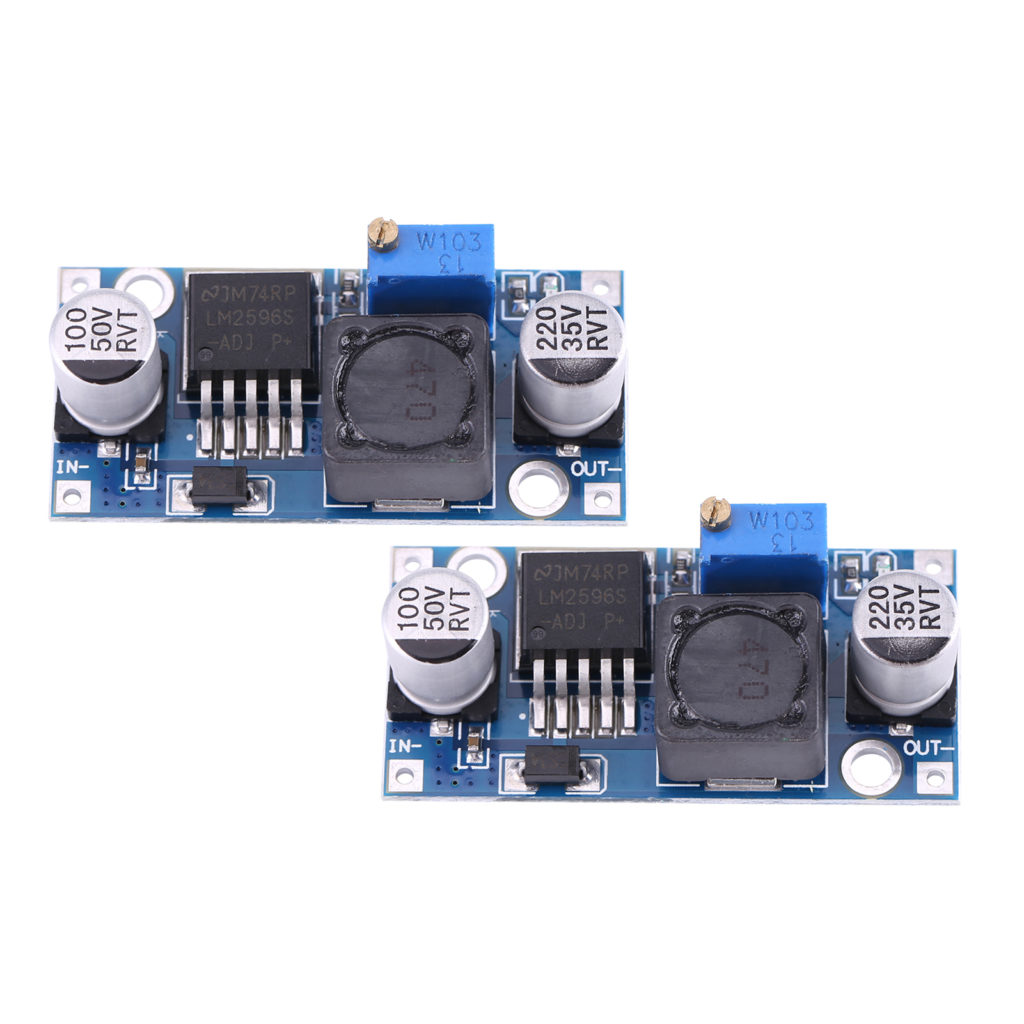 However, to see if they work as advertised I decided to put a module through its paces.

Visual Inspection
A visual inspection shows the small PCB contains only a handful of components.
The specification states that the module can accept an input voltage of between 4.5v and 35v and it’s reassuring to see that the input reservoir capacitor is rated at 50v. A good engineer always builds in a little margin. It’s less reassuring to see that the modules output maximum voltage is also 35v yet the designers elected to only rate the output capacitor at 35v. This capacitor will also have to work quite hard and a correctly rated, low ESR capacitor would have been better.
​
The regulator IC seems to be a badged LM2596 though I don’t recognise the manufacturers stamp.
The rest of the components seem pretty standard and in fact the entire design seems to follow the example design given in the datasheet.

The two exceptions being the inductor which is a 47uH instead of the recommended 33uH (though I’ve got some of these modules that do have the 33uH inductor), and the diode.

The Schottky diode recommended should have a 3A rating; matching the maximum rating of the regulator IC. However, the diode on the module is cause for concern.
It’s marked SS34 which according to the datasheet is a Schottky diode rated at 3A which is good. However, the datasheet also gives the physical dimensions of the diode and this diode is considerably smaller. In fact looking at the diode dimensions it looks this diode is probably only rated at 1A.
One of the other modules in the batch had a diode marked SS14 which is a 1A variant.

Testing
The only way to test a PSU is to power it up, put it under some type of load and stress it till it fails, and that’s what I did. The module was connected to my trusty 5A variable output PSU set to 15v and also connected to an ARRAY electronic load that can generate a fully adjustable load from 0 to 150 watts. I also connected a temperature probe to the regulator IC as these things have a nasty habit of getting very hot, very quickly and it’s a good idea to monitor the temperature closely if you don’t want a cloud of smoke, a bright flash and the remains of a regulator IC whizzing past your ear.
The module was powered on with its output set to 9v, the load applied and the results recorded. 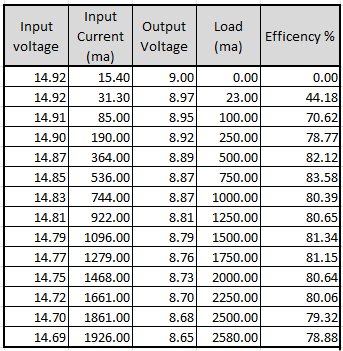 At 1.4 amp load the heat being generated by the IC reached 40 degrees so the testing was stopped. Attaching a heat sink isn’t easy on this module as the DPAK module is soldered directly to the PCB and there’s no mounding hole as found on a traditional TO220 package.
After some fiddling around I managed to solder a small piece of brass to the junction of where the IC is soldered to the PCB and this in turn could be used to bond the IC to a larger heat sink, however for ease and speed I opted to place a small fan to blow cold air over the board.

At just over 2.5 amps the output voltage from the module became unstable and then collapsed.

I was curious as to why the module was incapable of supplying the maximum 3 amps and found by tweaking the input voltage it was possible to push the module output to the IC’s maximum output.

The following table shows how I managed to push the module to the 3 amp limit. Pushing the module further caused the output voltage to collapse.

You can see from the above tables that the output voltage tends to sag a little as the load increases, but it’s less than around 0.5v from 0 to nearly 3 amps which isn’t bad and for most applications this wouldn’t be a problem.

​The efficiency was calculated using the simple formula:

Low Voltage Output
The lowest voltage output I could select from the module was 1.231v and under no load this seemed pretty constant as long as the input voltage remained over 5v. The output voltage does jump around a little bit as the load current is changed.

Short Circuit Test
This test was to see what would happen when the module output had a direct short circuit placed across it. Expecting the worse I was surprised to see that the module was perfectly happy, even with the short lasting well over 60 seconds. To get the regulator to recover correctly the short needed to be removed and then the power cycled to the module. In fact, it was noted that under several high-current situations, if the output voltage collapsed usually it was necessary to reduce the load significantly or cycle the power before things returned to normal.

Input Voltage Protection
With linear regulators it’s common to fit a protection diode between the input and output pins. This is because these regulators don’t like a higher voltage on their output pin compared to their input, and a common cause of regulator failure is large value capacitors placed on the outputs. When the input voltage is cut, the output reservoir capacitor discharges back through the regulator and destroys it. This could also be a problem if the module was being used in a battery charger type application.

So I connected the module output to the output of my bench PSU and gave it 20v for 30 seconds. The module didn’t seem to mind and when powered back on operated perfectly.

Switching Noise
These buck regulators all basically work in the same way by switching their outputs on and off at high frequencies. When their output is on, the reservoir capacitor is charged and when it reaches the correct voltage, the regulator output is switched off. Power for your circuit is then supplied by the reservoir capacitor. As it’s charge is depleted the regulator output switches back on again and re-charges the capacitor and the cycle repeats. As the load varies; and thus the demand on the reservoir capacitor, the regulator changes it’s switching frequency accordingly.
The only real downside to this is you get a lot of switching noise on the output and it’s difficult to filter out as the frequency keeps changing depending on the load.
I used on of the modules to power a project running at 5v that had a PIC, some LED displays and a few discrete TTL chips and didn’t experience any problems. However, these regulators may not be suitable for some types of projects. RF / Radio projects spring to mind.

Texas Instruments datasheet http://www.ti.com/lit/ds/symlink/lm2596.pdf suggests a small filter on the output consisting of a low value inductor and electrolytic capacitor.

About the Author: admin